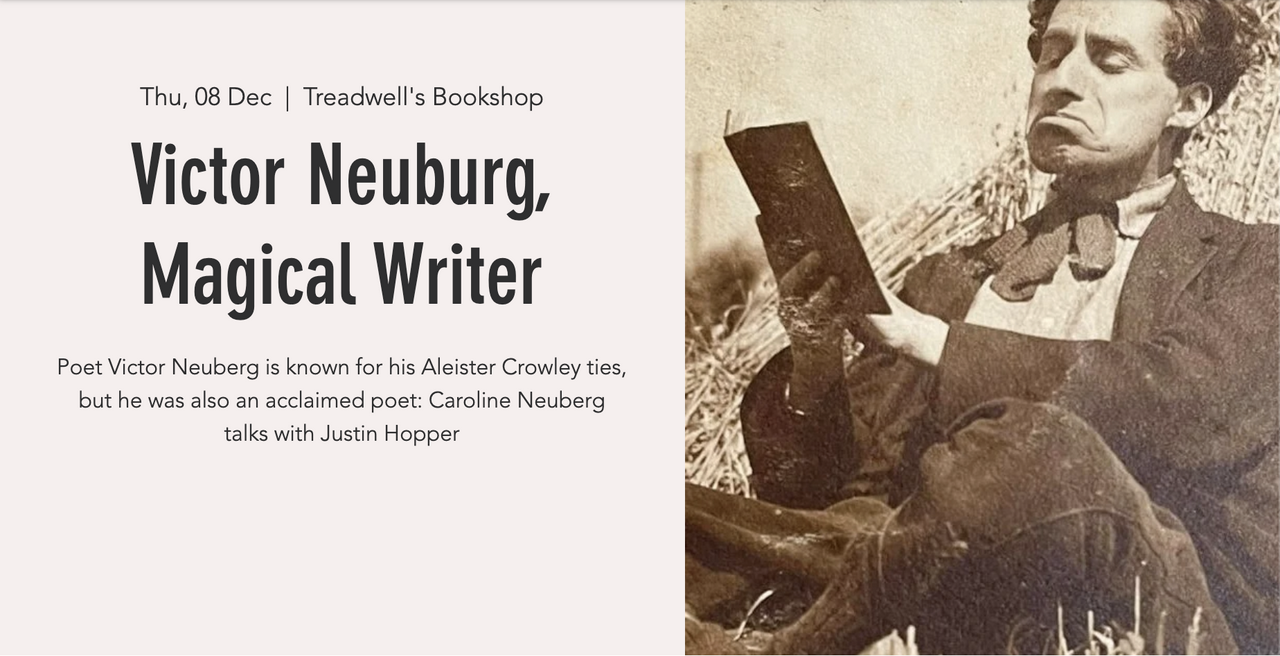 “Poet Victor Neuberg is known for his Aleister Crowley ties, but he was also an acclaimed poet: Caroline Neuberg talks with Justin Hopper

Victor Neuberg (1883-1940) was a British pagan writer who was part of the wider occult milieu of the early twentieth century. Though he never achieved fame, he nonetheless has a quiet but avid cult following. Neuberg is famed for his liaison with Aleister Crowley c. 1906-1914 and their joint magical workings (Choronzon / Paris), but he had his own important career in literature: writing poetry, founding Vine Press, and mentoring younger writers. Dylan Thomas even said, 'Vicky encouraged me as no one else has done'. Tonight his granddaughter Caroline Neuberg comes to Treadwell's for a lively 'on the sofa' talk with Justin Hopper to talk about Neuberg: the occult life, the writing career, the acclaimed poetry, and the pagan sensibility — he was a devotee of the god Pan. Drinks party follows.

Caroline Neuberg is joined by Justin Hopper, the editor of Obsolete Spells,  a selection of Neuburg's work and from other Vine Press books—over-the-top hymns to the Old Gods, tales from a utopian landscape, and more, most of which have been out of print for a century.”

Hermetic Library Calendar is a place to share upcoming and current events related to occultura and esoterrata provided by the Hermetic Library via email, web, rss, and in the ‘verse!

So, what event have you got to share on the Calendar? Add something to the Hermetic Library Calendar!

Become an ongoing supporter as a Patron or Subscriber. Or, if you’ve something else in mind, get in touch!